The proposed architectural addition is both simple and contemporary while still responding to the original building’s proportions. 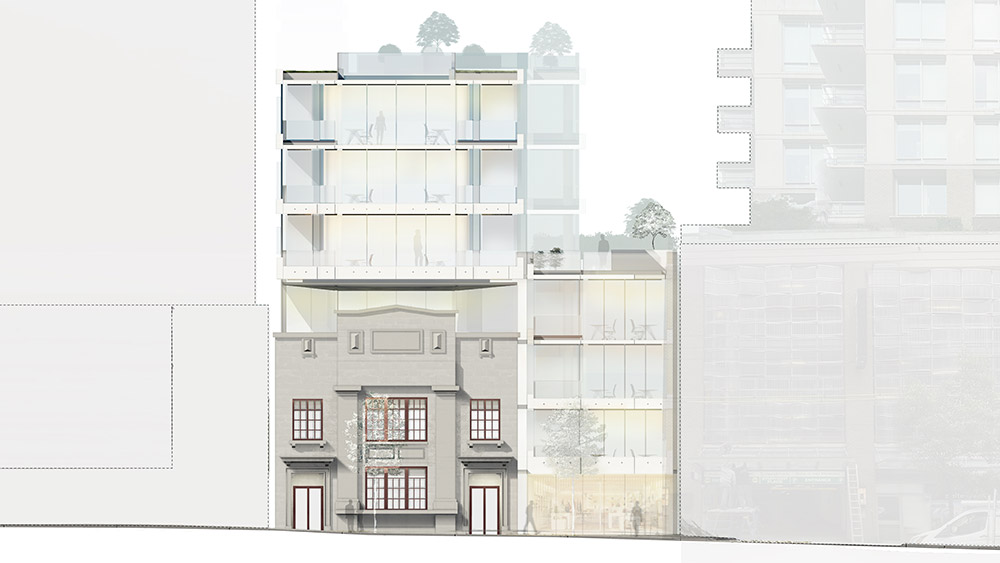 The Great Veterans Association Hall was designed by prominent Vancouver architect Alfred Cox and constructed in 1926. Developed for Canada’s largest veteran organization which eventually grew into the Canadian Legion, it was constructed to assist veterans of the first world war. It served this purpose for more than thirty years before it was adapted into a series of night clubs that served the LGBTQ2S+ community. The building is an example of interwar classical revival with a symmetrical façade of two stories. Character defining elements also include twin recessed entryways, banked windows and parged classical façade elements including engaged pilasters and pediments as well as bracketed sills.

AMA has proposed full retention and designation of character defining elements of the existing struc-ture along with an adaptation and addition of new office building structure in exposed concrete to contrast with the concrete construction of the original heritage building. The proposed architectural addition is restrained and minimal while responding to the original building’s proportions. Concrete floor slabs get progressively thinner, and lighter as the struc-ture rises, symbolizing the progression of time.

SUSTAINABILITY: The project employs a number of innovative wellness and green building strategies. The roof surfaces have been designed to retain and distribute stormwater flow. Grey water will be retained in a cistern for use throughout the development. Glazing is high efficiency triple-glazed and Passivhaus rated. The project will not utilize carbon fuels in its operations with a fully electric HVAC and Plumbing System. Passive design strategies have been employed to reduce the need for mechanical systems, and all floor areas have access to passive ventilation systems. Touchless control and access systems are employed throughout and the project is fully compartmentalized to avoid cross-contamination of floor areas.